In the past, when speaking of the history of Taiwan, many documents have focused largely on the Han population. However, the island of Taiwan is also home to Native Austronesian peoples that have inhabited this land for thousands of years. In Taiwan, they are called Indigenous Taiwanese. Nearly 1/3rd of the population of Taitung are of Indigenous Taiwanese origin. To promote the rich Austronesian cultural heritage of Taitung’s Indigenous population, the Taitung Government has held the International Austronesian Art Awards since 2011. In an effort to promote artistic interactions between Austronesian artists throughout the world, starting in 2014 the awards were changed to a biannual event that integrates Austronesian culture with Modern art. This year, the awards have invited ten talented local Taiwanese artists to participate. Taking inspiration from Taitung’s natural beauty and its rich Austronesian culture, the artists will create various works of art using a variety of diverse artistic formats, including composite media, woodcut, lacquer, acrylic, and more. With their own two hands, they will create artwork representing the diverse Austronesian cultures of Taiwan to the world. Fang’s Bridge is built with the native paper mulberry tree. As a physical embodiment of the Austronesian culture, Bridge represents the connection between the Austronesian peoples scattered throughout the world. Created using a variety of natural media, including straw, charcoal, and braided rope, An’s ngialibaibade is a piece that represents the deep mountains and seas. Expertly incorporating scent into her art, the artwork invokes a sense of the high-mountain surroundings of An’s hometown. 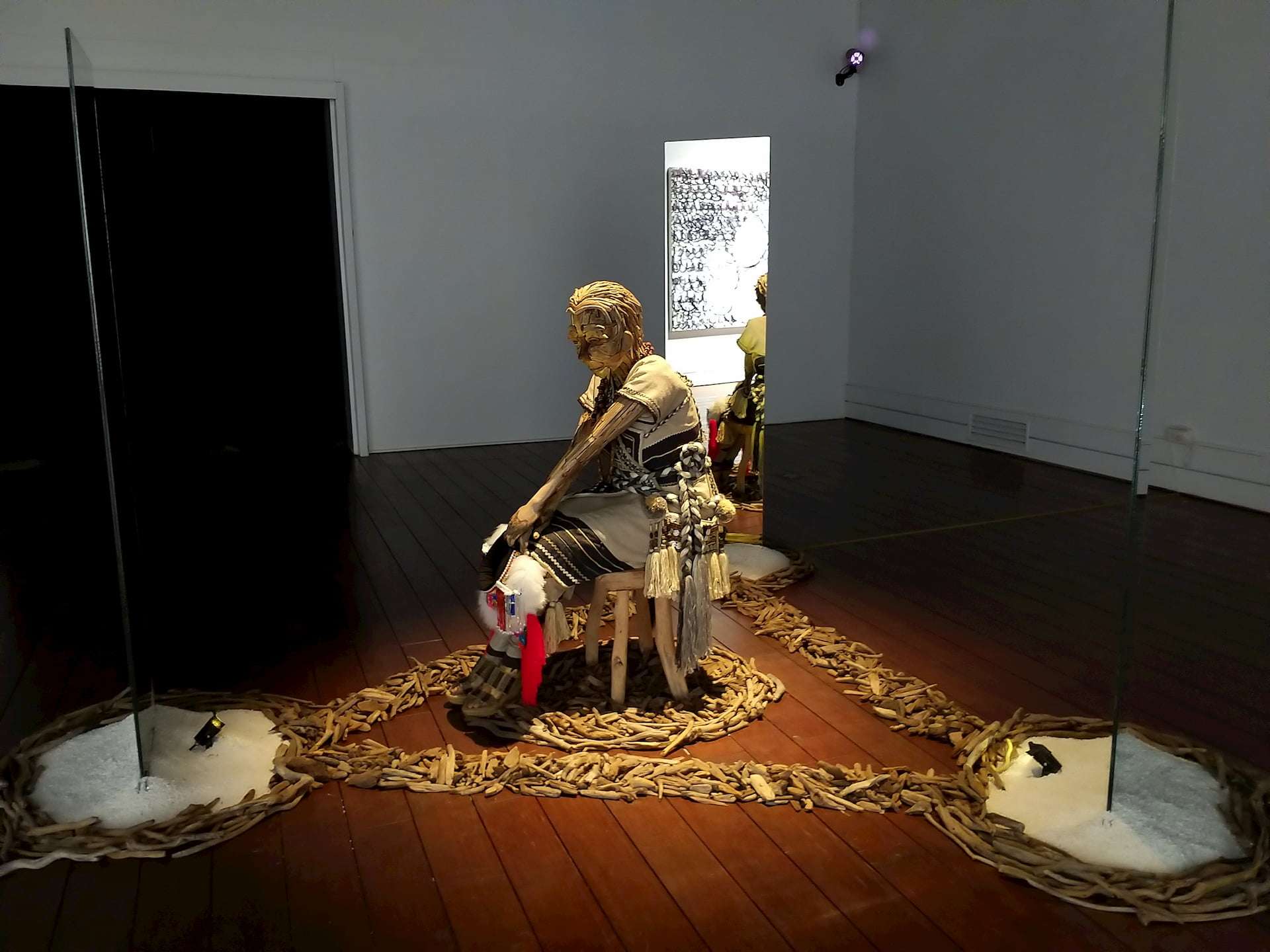 Makeup Remover is a piece by Fan that reflects on the meaning of tradition and ethnic identity. Using makeup as a metaphor for stereotypical Indigenous activities such as singing, dancing, and drinking, Fan’s piece attempts to shed this stereotypical image created by outsiders and return the Indigenous identity to its pure and original form. Incorporating a variety of recycled waste collected around Taitung, Li’s piece reflects his concern for the local environment. Wrapped in white paper, the collected waste sitting on the table represents the on-going pollution problems. while The reflections under the table suggest the exploitation of the environment by the local cement industry. Li Zhiwen’s Community imagines the earth as a large wooden boat. The boat is filled with stones of different shapes and sizes, representing the various peoples of the world. Wrapped in aluminum, the glittering stones represent human warmth and the fact that we are all one and the same. We are all brothers and sisters in the same boat, so we must help each other through thick and thin. The Tidal Life of 3000 Stones was inspired by Peng’s times spent on the seashore of Dulan. With 3000 jet-black stones pieced together, the piece reminds one of the vastness of the ocean from afar. Listening to the paper strips below swaying back and forth in the wind, one can almost picture the ebb and flow of the waves and stones clattering in the tide. Also inspired by the sea, Li’s Breath-Wave is a different take on the theme. Using the natural colors of the wood grain as the deep dark portions of the sea, the piece is vivid and riveting. The sound installations of crashing waves also adds to the immersive atmosphere. Watching the Dulan seashore’s stones crashing and colliding against each other, Xiao was reminded of the tumultuous year that 2020 was. To commemorate the ups and downs of life, Xiao created this piece. East Coast Sonata, with its bright fluorescent colors, is akin to a wild and lively rhapsody. With its strong flowing line-work and abundant energy, one can begin to distinguish the seas, mountains, and village scenery of Taitung upon closer examination. A native of Chishang, Liu’s work is an ode to his hometown. Incorporating his concept of breath, the nine separate works all follow the theme of breath, time, and space. With each piece having subtle abstract imagery of the ears of rice, Liu’s work reflects his life experience in Taitung.

The 2020 Austronesian International Art Awards are a wonderful opportunity to experience the magnificence of Austronesian art first-hand. With 10 talented indigenous artists showcasing their works, interested parties must make haste to ensure they have a chance to visit before the exhibition ends. What are you waiting for? Come experience the power and uniqueness of indigenous art!
–
Dates：Sat, December 12th 2020 – Sun, January 17th 2021
Location： Taitung Art Museum
Time: 09:00 AM – 05:00 PM （Tuesday to Sunday）
Organizer：Taitung County Government
Official Website：https://tm.ccl.ttct.edu.tw/southisland/

2022 World Women’s Art Festival As gender equality awareness rises and women gain higher status in society, a rising number of female artists are born. Patriarchy in art history is beginning to be overturned, [...]